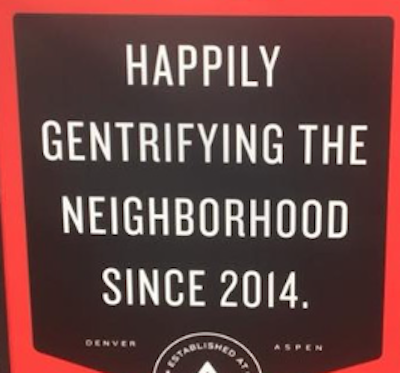 Last November, right around Thanksgiving, a coffee shop in the 2800 block of Larimer Street became the center of attention in Denver. It was all over the news, and was featured in publications based far away from here.

You remember the sign: Happily gentrifying the neighborhood since 2014.

I sort of gasped when I saw a photograph of the sign. Tone deaf, is what one of my milder editors would have said. It was an “ouch” for so many people who no longer could afford to live in their home, pay taxes on their home, or cough up rents that were climbing while salaries were stalled in neutral (that is, if you could find some place at all).

That sign just totally went ballistic, with protests, and an apology from the coffee shop owner. The politicians said all the right things, but……

Denver was – and still is – feeling sensitive about the word “gentrification.” There was even a story in which a reporter contacted a dictionary company to see if readers had looked up the meaning of “gentrification.” Many people did look it up, said the dictionary guru, and then there were discussions of whether the G-word was good or bad or just the way the city was going. It’s complicated.

My neighborhood went through a wave of gentrification in the mid- to late-1990s, and then a bit more in the early 2000s, but it was incremental, not like a bomb went off. Small, two-story homes were gone, replaced by apartment and condo buildings.

By 2008 and the Great Recession, all that momentum fell apart, and things got back to normal – if also dismal for so many people. But over the past five or seven years, many parts of Denver (and cities outside of Denver) have roared back, at times leaving neighborhoods that no longer are recognizable and long-time markers – directional or historic – that are just gone.

Now, my neighborhood is waiting to see what is going to happen with two restaurants that have been shuttered for more than a year. They’re large in square footage, but in human scale, varied in architectural style, part of what makes a neighborhood walkable and pleasant to get around. I am not taking any bets on the fate of these two restaurants. I am just waiting for the chain link fences to go up, with signs promising another couple of five-story apartment blocks. Or something.

A walk by those empty buildings this past weekend made me remember the uproar over the coffee shop sign, which felt like salt rubbed into a lot of wounds. Note: I was in that part of town this morning, and there was no sign outside the coffee shop.

As you can imagine, Denver is not the only place going through massive population growth and change, with long-time residents suddenly feeling squeezed out.

Below are some links that explore this further. The first is a story in this morning’s Denverite on the large and historic predominantly Hispanic Auraria neighborhood that was demolished to create a massive campus for three institutions of higher education. It’s a story a good number of people here know, but for newcomers, this is an eye opener. https://denverite.com/2018/11/05/denver-auraria-history-displacement/?mc_cid=c1ca5e9683&mc_eid=41cc6690bf

Then, there is a story from yesterday’s Washington Post about the upheaval in the town of East Palo Alto, California, which sounds so familiar: https://www.washingtonpost.com/national/a-semi-feudal-society-in-east-palo-alto-the-influx-of-tech-companies-pushes-residents-to-a-breaking-point-over-gentrification/2018/11/02/03e1004c-d17c-11e8-b2d2-f397227b43f0_story.html?utm_term=.8a99472e9ac1

It may be 51 years since the Skyline Urban Renewal Project raged through downtown Denver, but there is a link from Medium to a piece on the massive destruction of 27 square blocks in the 1960s. The project cleared out historic buildings and the poor residents. Read it and weep (especially because of the photograph at the top of the story, which looks like a million-car parking lot):

Finally, here are thoughtful pieces on gentrification in The Belt Magazine (that’s Belt as is Rust Belt); the Strong Towns Journal, which looks at various aspects of gentrification, and a piece last year by a former Denver resident writing about her city for The Guardian. It’s not pretty, but it will make you feel right at home.

2 Replies to “(Unhappily) watching the city change every day”